Updos are a great way to jazz up your hairstyle rut and update your everyday look. When it comes to updos, many girls believe that they have no time to create such complicated hairstyles.

In reality, here are nine super easy updos that you can create in a matter of a few minutes, if not seconds.

The reverse braid looks complicated, but it is not too difficult. Flip your hair upside-down and do a French braid from the bottom to the crown of your head. A French braid is like a normal braid, but each time you cross your braid over, take more hair into the side that you are moving.

Once the braid reaches the top of your head, create a ponytail. Wrap the ponytail around itself until a loose bun is created and then pin it with a few bobby-pins.

This is a simple way to create an updo in less than five minutes. Leaving your hair down put a headband on top of your hair.

From there, simply tuck strands into the headband. Make it as loose or tight as you would like. You can leave a few pieces out to frame your face.

Create two ponytails at the back of the head. Then braid those and use an elastic to tie the ends. Then wrap one into a loose coil at the back of your head, pinning to keep it in place. Wrap the second around the first, pinning as well.

Separate your hair into three parts (two sides and the back). Create a ponytail at the back of your head, and braid it to the end. Create a loose French braid from the front of your head to just before the crown. Tie the rest into a high ponytail, leaving a small amount from the braid out. Then wrap the loose part around the base of the ponytail, pinning at the end with a bobby-pin. 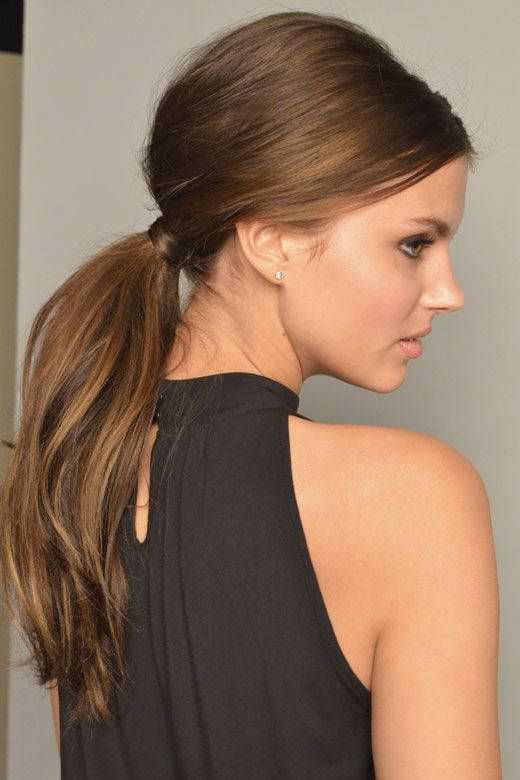 Elastics often leave creases. Protect your style with a simple knot ponytail. Take two thin pieces of hair from behind your ears and wrap it around the rest of your hair until it creates a ponytail.

Then tie it in a simple knot. To do that, simply cross one piece over the other, take the bottom piece and wrap it over the top and behind. Pin in place to ensure that it stays.

7. The longer and fuller ponytail

This trick is created by using two ponytails. Separate your hair into upper and lower pieces and tie each with an elastic. Curl your hair so that it looks like one full ponytail.

Create a low ponytail and tie with an elastic. With your finger and thumb, press them up through the base of the ponytail, between your head and the elastic.

Grab the ponytail with your finger and thumb, and pull it over and through. Then take the ponytail and pull through again, this time pinning in place. Separate your hair into two sections (top and lower). Create two ponytails. Put your fingers and thumb through your ponytail close to your head and pull the ponytail up and through. Do this twice for each section. Braid the rest and tuck into the bottom section.

Sure, practice is needed, but as soon as you learn how to create these updos correctly, you will notice how easy they actually are. If you have your own easy updo ideas, share them in the comments, please.

Keep Your Hair Out of Your Face with These 15 Hair...