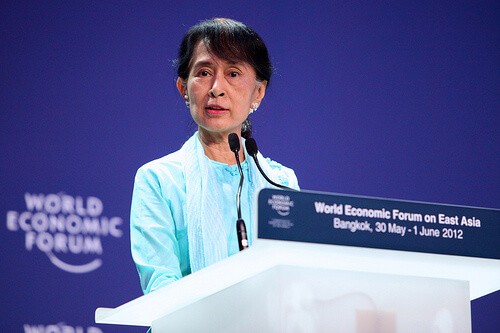 The mother of Mary Shelley, the author of Frankenstein, Mary Woolstonecraft, in 1792 wrote a very important book “A Vindication of the Rights of Women” in which she asserted that women and men should have equal rights. At that time, her statements were seen as shocking, but ultimately Mary Woolstonecraft became regarded as a good feminist writer.

Elizabeth I is another extraordinary woman who changed the world. She was the first to give her name to an age, and was the first successful woman who ruled in her own right and carried out religious stability after a few decades of terrible turmoil. Elizabeth refused to marry and ruled with her advisers, but there was no doubt who was in charge!

Aung San Suu Kyi is an extraordinary woman of contemporary times. Her fight for democracy in Burma cost her 15 years imprisonment. She was away from her family, and she saw them rarely. She was finally freed in 2010 and she never gave up. Aung San Suu Kyi would say that a free country was worth more than her own freedom and personal happiness.

A century ago, most women were unconversant with sexual issues, even if they got married. In 1918, Marie Stopes published “Married Love”, that was a really innovative work. She carried out a very valuable work that concerns family planning that allowed women to control over their reproductive life and fertility.

Oxygen Bars: A Classier Retreat Than Any Pub