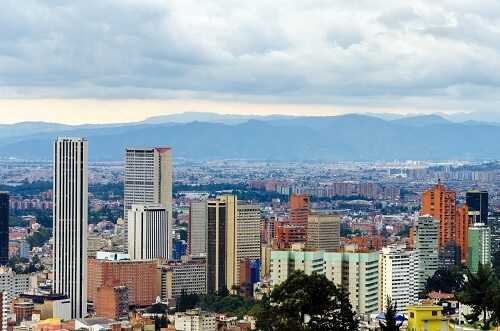 Bogota is the capital of the country of Colombia and is becoming a very popular destination for travellers. On first glance it may appear to be just another smog-filled, polluted and poverty-stricken place. In actual fact, when you look more closely, Bogota is cleaning up its act and becoming a chic, urban city. It is South America’s fourth largest city and is being transformed into the country’s most modern and cultured city.

The Colombian Capital in Detail for Travellers

Bogota was founded around 1538 by a man called Gonzalo Jimẻnez de Quesada and it was formerly a citadel belonging to King Bacatá, which is where it is said that the city’s name originates from.

Most people who decide to travel to Colombia begin their adventure in the capital. Whilst the north of the city has paved the way for modern structures and progression, the south of Bogota is where all of the museums, quaint cafes, churches and cultural events can be found.

Among the attractions to be found in the city you will find the fabulous Museo de Bogota. This museum is filled to the brim with exhibits and information about the history of this culturally rich city. Just outside of Bogota is the breath-taking Zipaquira Salt Cathedral. This used to be a salt mine and the cathedral standing inside the mines was built originally by the miners, for religious purposes, in the 20th century. There are seven illuminated salt rock chambers to explore, one of which contains a salt rock depiction of The Nativity as well as a room which honours the dead.

A popular sector of the city with residents and visitors alike is the La Candelaria District. This area is filled with historic buildings, churches, museums, restaurants and shops. The nightlife of the city is also lively in this district and many of the clubs are open until 3am for dancing the night away. Whilst exploring the city, you will find many parks and leisure spots peppered in between the industrial sprawl. There are also many street fairs, festivals and street exhibitions to keep you busy whilst on your trip.

If you enjoy shopping, then Bogota is the perfect destination for you. There is an abundance of shopping centres to explore in the centre of the city and you will find a lot of shoe shops in particular. Many of the clothes shops import their stock from Europe and North America which means that travellers are sure to find a great bargain or two. You will also find that there is a variety of beautiful, ornate umbrellas to choose from. Almost all Colombians carry an umbrella as the weather is so unpredictable!

In terms of weather, April and May seem to be the wettest months in the city. The summer months can be quite wet and so it is recommended that you visit Bogota in December, January or February, when it tends to rain the least.

A trip to Bogota is certainly a great opportunity for travellers of all types and group dynamics to enjoy a wonderful, memorable time away from home. No matter what your idea of a perfect holiday is – shopping, culture or the opportunity to dance the night away, the city of Bogota delivers on all levels and is a destination that many people choose to visit time and time again.

Diabetes Symptoms: How to Recognize the Onset of D...