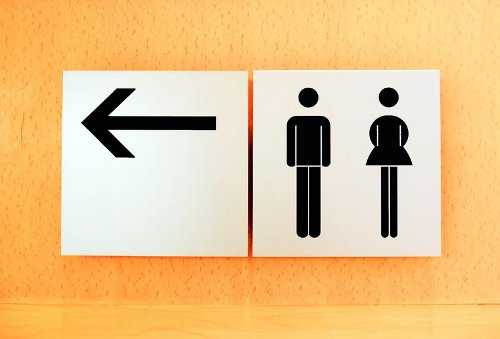 Free access, clean public toilets is so commonplace in the US that most Americans do not give them a second thought. It is expected. However, this was not always the case, and there is a long history surrounding the public toilet. Because the public health is impacted if toilets are either unavailable, or dirty and germ laden, several Federal, state and local laws exist for the protection of the overall health of the citizens.

The Americans With Disabilities Act (ADA) provides for proper signage identifying public toilets as Men, Women, Unisex or Family and Handicapped. In a public school the signage may say Boys and Girls. Grade 2 braille should be on all signs for the visually impaired. Other signs required by the ADA include, Please Flush After Using, Employees Must Wash Hands Before Returning to Work, Put Trash In Its Place and Pitch In.

According to the Americans With Disabilities Act, no employee shall suffer from the adverse health effects of not having toilet facilities available. This is enforced by the Department of Labor (DOL) and Occupational Safety and Health Administration (OSHA). However, The US Department of Health and Human Services (DHHS), ignores the laws that cover the necessity for public toilets outside the workplace. Most people are not aware that their federally-protected rights to a public toilet are being denied.

This also means that unless state and local laws dictate otherwise, public transit and government buildings can deny use of a toilet for anyone other than their employees.

Pay public toilets are still popular in other countries, however, they were outlawed in the US because they were considered sexual discrimination against women. While women always need to use a stall, men do not always need the same privacy.

When Can You Void?

Even though the law mandates that employers provide public toilet facilities for their workers, many corporations argued that the law did not say their employees had the right to use the facilities. After millions of complaints, OSHA issued a memorandum on April 6, 1998, stating that employers were required by law to allow employees to use the toilet facilities when needed. This means that an employee can stop work at anytime to use the public toilet without being punished by the employer. However, OSHA is understaffed and cannot police all companies and their toilet policies. Non-union workers are often afraid to complain, and in many instances, the law is being ignored by employers.

OSHA has however, issued hundreds citations to employers for not allowing employees to use the toilet. One famous case involves the Jim Beam Company who filed a complaint against OSHA. The company hired a urologist to testify at the hearing that if an employee defecates on himself it is a personal problem, not a health issue.

The American Restroom Association, an advocacy group, is trying to raise awareness of the failure of DHHS to enforce existing laws concerning the availability of public toilets to all citizens. They say no new laws need to be passed, but the agency in charge of the pubic health of all Americans has the duty to enforce the laws that cover one of the most basic needs of all citizens.

9 Wise Tips for Getting Ready for Class Faster and...