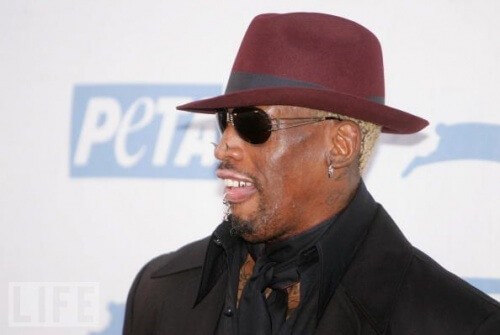 Celebrity activism is not a new thing in Hollywood; this is because people in the spotlight tend to make statements that they believe will be followed by fans and various media outlets. At times, it can be very annoying to deal with celebrity activism on various issues. However, animal rights is one area that celebrities have been very involved in pushing forward and this has resulted in stronger protection for animals according to the PETA website at Peta.com.

According to Furisdead.com, Dennis Rodman was the first male celebrity to pose for the PETA campaign known as Rather Go Naked Than Wear Fur”. The ad told males to be comfortable in their own skin and think ink instead of mink. The ad was shot in December 2005 and according to PETA, Dennis Rodman has been active for the last five years in raising and donating money to PETA in order to help them fight for animal rights.

Pamela Anderson is a celebrity that first started working with PETA in their anti-fur ads during 1999. According to her website, she has been involved with PETA in order to raise funds and awareness of animal cruelty for the last 11 years. Pink is another celebrity that has participated in a PETA ad against animal cruelty since 2006. She has also been a critic of KFC and helped to organize a petition against unethical treatment of chickens. She is currently involved in this fight along with her anti-fur belief spreading within magazines such as Vogue.

Dita Von Teese is a celebrity dancer that is well known for her PETA ads that promote animal spaying and neutering household pets. She first worked for PETA in 2007 for their Animal Birth Control ad campaign Dita Von Teese was the first celebrity to raise awareness about animal population problems. She currently is working on some new PETA ads according to her Twitter page and she has been involved with PETA for three years now.

According to the PETA website, Alicia Silverstone was voted the sexiest vegetarian and she was the first female to appear nude within their ads and promote a vegetarian lifestyle. She has worked with PETA since 2004 and she is still involved with fund raising and advertising according to PETA. Eva Mendes also appeared nude in a PETA ad against fur in 2007; she is currently still working with PETA and has become their celebrity face against animal fur.

Jenna Jameson is a former adult star that appears in PETA’s latest “Pleather Yourself” ad campaign and they are currently working on the expansion of this campaign according to PETA.

10 Natural Summer Remedies for Your Straight or Cu...