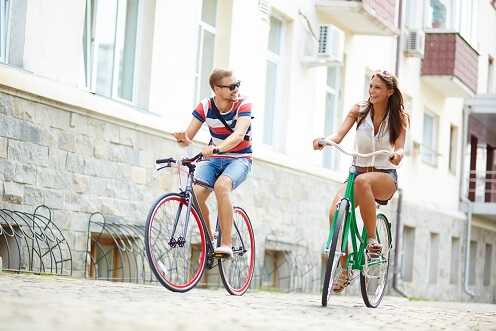 Several cycling organizations are supporting a growing movement for complete or liveable streets programs in cities across America. This is an initiative to make changes on new and existing streets to accommodate bicyclers, walkers, wheelchair riders, and any other non-internal-combustion-engine type of transportation. Complete streets are different from biking trails which are used mostly for recreation. Liveable streets are designed to facilitate biking and walking as an alternative to driving a car to stores or schools.

Interested citizens are working to start such complete streets programs in their local areas. Sometimes turning a lane into a liveable street is as simple as painting a bike lane along the edge of the roadway. Other times, cities opt to build a separate lane beside a busy road. Like any other community change, it will have costs and payoffs, and the costs will come first. The eventual payoffs, however, will so far outweigh the costs that the program is worth the initial time and trouble.

What will be the payoffs?

Health: The connection between a more sedentary life and poor health and obesity is clear and well researched. Conversely, there is a strong connection between active transportation and good health. Many parents want their children to be able to walk to school, but feel that there isn’t a safe way for them to get there.

Environmental: Bicycles don’t emit much carbon monoxide. Cars do though.

National Security: Using less foreign oil means less dependence on other countries. Even though many politicians say the only solution is to tear our country apart to extract domestic resources, liveable streets can still augment this and make it possible to draw down these domestic oil stockpiles less quickly.

Better accessibility for the disabled

Liveable streets are designed with motorized wheelchairs and scooters in mind as well. Currently, there is a small but important segment of the population that relies on these devices as their primary means of transportation. Their needs should be addressed as well.

People in cars are more isolated from each other than those who walk or bicycle. Bicycling and walking strengthens people’s ties to each other.

If you haven’t been on a bicycle trip in a long time, try a short one to your local grocery store. If imagining riding through congested traffic that makes no concessions to bicyclists scares you, then contact your local bike club to talk about working for more liveable streets.

5 Ways to Get Your Child to Eat Healthy Foods

5 Simple Ways for Parents to Encourage Their Child...