2010 was the year, London the place where Kazakhstan’s academy-trained artists open the doors of Central Asia wide to the diverse and colourful world of Kazakhstan’s figurative and non-figurative brushwork, sculpture and decorative arts. As with Paris in 1909 after the arrival of Sergei Diaghilev’s Ballet Russes, so with the London art world in 2010 – the western’s world’s view of Kazakhstan will never be the same again. 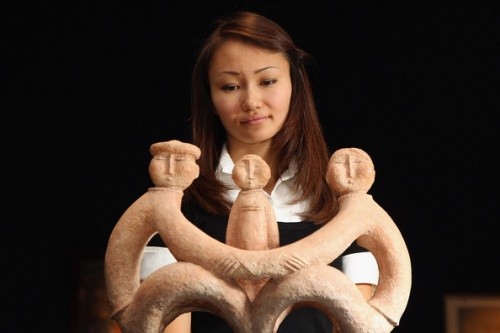 The exhibition season of Christie’s London Auction House begins at the start of autumn, in September. At this mellow time of year London attracts art lovers from all around the globe. Here in a major cultural metropolis of the western world, masterpieces of creativity are consigned for sale, viewed and acquired by connoisseurs and institutions, willing to pay millions as their tribute for wonderful works of art. The auction process is a public gathering of the art community, the hammer price an affirmation of the artwork’s aesthetic ranking and monetary value in the eyes of all. During the last year the turnover of auction house Christie’s was 2.5 billion pounds.

From the first to eighth of September 2010 Christie’s London Auction House hosted a unique exhibition “Treasures of Kazakhstan”, attended by thousands of people in the space of a few days. The event was held in Christie’s exhibition hall 2 minutes walk from Royal St James’ Palace, showcasing 50 super works by Russian and Kazakh artists from the Kasteev State Museum Kazakhstan, as well as 25 paintings from the personal collection of Kazakh businessman and patron of culture Nurlan Smagulov. Thus it was that art lovers in the Western world first became acquainted with the picturesque masterpieces of Kazakhstan.

The “Treasures of Kazakhstan” exhibition excited great interest from British and international media. Art world and business journalists visited the event, admiring the paintings and clamouring for more information about the story behind “Treasures of Kazakhstan”. Fielding the barrage of questions were the organizers and decision makers for the exhibition, in particular, Alexei Tiesenhausen, Head of Christie’s Russian art Department, British businessman and philanthropist Malik Ishmuratov and Kazakh savants of art Nurlan Smagulov and Bakhyt Seraliev.

Alexei Tiesenhausen first explained to the excited reporters how the idea to hold such an exhibition was born and why he was so personally committed to the project:

“My wife is Kazakh,” explained Tiesenhausen, “so I am connected with strong ties to Kazakhstan. While I was there, I visited the Kasteev State Museum where I was, to be frank, taken aback by the brilliance of the paintings on display there. I immediately realized that these pictures were worth being seen by the public in London and would be highly appreciated by London’s local and international world of fine art experts, collectors and connoisseurs. The time was right, I instinctively felt, to make this idea come to life. As a first step I had to get the agreement of the Kazakh state apparatus to allow these priceless works of art to leave Kazakhstan, albeit for a short time. However, once I explained the project and with the valuable assistance of Mr Malik Ishmuratov and Mr Sergei Kim, these barriers were surprisingly easy to overcome. The museum agreed to provide the pictures and on-site provided support. It took quite a long time to find the right sponsors, because the cost of organizing the exhibition was very high. But all’s well that ends well, and, look around you, the cream of Kazakh art is to be seen in London!”

Unsurprisingly, art-world journalists were interested in the cost of organizing such a ground breaking exposition of high quality art from the other side of the planet. The exhibition organizers were happy to give some of the facts and figures and the story behind the exhibition. Insurance amount of all the paintings was about one million Euros. The most valuable paintings were insured for the sum of one hundred thousand Euros.

Exhibition organizer Malik Ishmuratov confided to reporters his vision and sense of mission.

“It is not so important how many sponsors have spent on this exhibition,” declared Ishmuratov, “The main thing is that the pictures are here, in London to be viewed and appreciated. People who have enough money will always be glad to spend it on worthy and charitable causes. My business partners at Oracle Capital and elsewhere I were determined to support this event with all our energy and resources.”

Later Malik Ishmuratov explained to the waiting reporters how an incident from his childhood on the USSR inspired him to become involved in putting on the “Treasures of Kazakhstan” exhibition:“When I was learning to draw as a boy and attended art school, the teachers there taught us to draw, citing as good models to imitate many of the actual pictures that we see around us in “Treasures of Kazakhstan.” So from that day to this I remembered these pictures and thought of them as a sort of quality standard. And when the idea was mooted to bring these pictures to London and to show them to the public, I was very glad to participate in the project”.
Malik Ishmuratov also shared his feelings about art. He considers art as important instrument of international cultural exchange and communication. “Treasures of Kazakhstan” is another pillar in the bridge between Eastern and Western civilizations; it is one more step toward mutual understanding, appreciation and respect.

The organizers of “Treasures of Kazakhstan” made it clear that no picture will be sold at auction and that all the pictures were transported to London exclusively for the educational purposes of the exhibition. The objectives of the “Treasures of Kazakhstan” exhibition are diplomatic, cultural and didactic – to show the world that Kazakhstan is not some sort of ‘Wild East’ ,but in contrast to this,it is a treasure house of culture, education and skill and opportunities.

Kazakhstan is a nation with a unique, ancient and diverse culture. The colourful and fused traditions of the artists of Kazakhstan help to show the world a sample of the depth and quality of that faraway land’s history – and the promise of its future.

The exhibition was attended by Mr Bakhyt Seraliev, Director of the Kasteev Museum, from where the pictures were lent for the London showing. Director Seraliev greeted the press conference with friendliness and excellent rapport, revealing with professional pride how hard the Kasteev Museum had worked to ensure that the artworks were brought to London safely and in perfect condition.

“I am happy that our pictures are so interesting to the public in London,” observed Director Seraliev. “I am especially proud for our artists who managed to get attention for their work from the most discerning of fine art experts, connoisseurs and art lovers. This exhibition is the first in the history of the Kasteev Museum which has been put on in Europe.”
Director Seraliev went on to thank the organizers of the exhibition for a particularly generous item of help. “The exhibition “Treasures of Kazakhstan” is a wonderful gift for the 75th anniversary if our museum. The organizers of “Treasures of Kazakhstan” made a most generous gift to the Kasteev Museum – all the paintings were carefully re-framed. Earlier works of art from our museum had to be exhibited in the low-quality sub-standard frames. Now, all frames have been changed to match the quality of the pieces. Moreover, these frames will go back to Kazakhstan, along with pictures. This is an expensive and valuable gift for the Kasteev Museum.”

The Chairman of Christie’s auction house in Britain, David Linley, thanked the organizers for their efforts, especially the Kasteev Museum. Chairman David Linley expressed his gratitude to the Embassy of the Republic of Kazakhstan in the UK. Chairman Linley said that he hoped that the event would be an important link made between Kazakh culture and the European art community.

How to Survive a Children’s Party

Why Your Pet Needs Organic Food