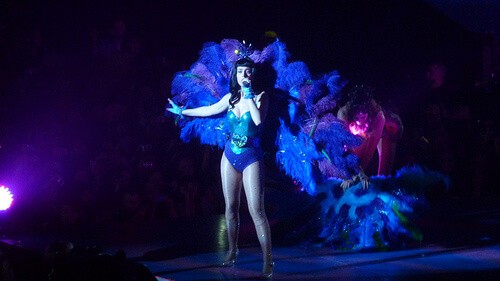 The voice of our generation, Katy Perry, is well known for her quirky fashion sense, electro-pop music, and eye-catching stage presence. Although Katy Perry lives her life out in the open, there are some facts you might not know about her.

The name of Katy Perry’s cat is created as a pun name after her stage name – Kitty Purry. Her beloved cat makes an appearance in a few her music videos including her popular song – “I kissed a girl”.

You might not know, but Katy Perry perfectly represents her astrology sign – Scorpio. She has an amazing stage presence and magnetically sexy voice. What you get from Katy Perry is a shell-shock effect. Her performances are filled with electricity and surprise.

Do you know that Katy Perry can play both electric and acoustic guitar? Perry has been playing guitar since she got her first guitar at the age of 13. She also plays the piano, and has taken singing lessons most of her life.

Madonna has a lot of influence on Perry. Her musical performance and stage appearance with use of images and colors in the songs make the music videos a visually appealing experience. Katy has always said that she has been inspired by Madonna.

Katy’s love for cats is not only evident in her stage name and her appearance, but in her fragrance product Purr too. The pretty purple cat-shaped bottle is an inspiration from her Catwoman stage costume.

Katy Perry’s oldest tattoo Jesus written on her left wrist marks her religious and traditional background as a child. Katy started her music career as a Christian artist and was raised with gospel songs. Even though today Katy Perry is a raging music icon, this tattoo is very important to her because it reminds her of the initial phase of her career.

Katy Perry is actually a natural blonde, but she dyes it black and plenty of other colors too! This is one of the most interesting things you might not know about Katy Perry. Am I right?

What other interesting facts about Katy Perry do you know? Share your thoughts, please!

8 Tips for Becoming a Better Dieter