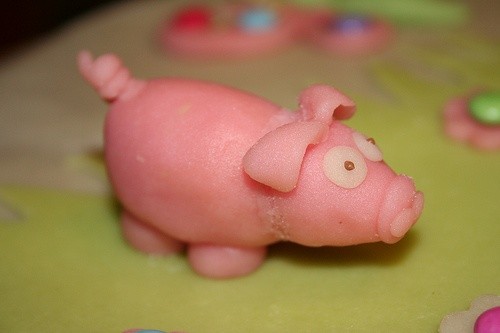 Throughout history, we’ve come to perceive pigs in a variety of ways. Most people think piglets are cute, but when it comes to their adult counterparts, some are skeptical, some see human traits in them, and others simply don’t think about them. Many pigs are now out of the public eye. Gone are the days of small family farms, and pigs have been allocated to large factory-style farms. Let’s take a look at these often-forgotten fascinating creatures.

The following quote is often attributed to Winston Churchill:
“Dogs look up to us. Cats look down on us. Pigs treat us as equals.” Most of us are familiar with cat and dog behaviors, but our true knowledge of pigs is limited because they are usually confined to the category of “food” animals.

A pig farmer named Dick King-Smith created Babe, the loveable piglet featured later, in 1995, in the movie of the same name. James Cromwell had the lead role in the movie, and decided to become vegetarian after working one-on-one with his pink colleague.

There is a great book out on the subject of farm animal emotions and behaviors, titled The Pig Who Sang to the Moon. The author, Jeffrey Moussaieff Masson, is a former psychoanalyst who became very interested in studying animal behaviors, and in fact teamed up with a biologist for one of his other, similar books. The Pig Who Sang to the Moon entertains the reader with many anecdotes about experiences people have had with farm animals, and information about worldwide sanctuaries that take in abused animals, as well as those that have escaped slaughter. This actually does happen: In rare cases, pigs have either fallen (or jumped?) from trucks on the way to slaughter and run into nearby woods. Naturally, Masson came under scrutiny by scientists, and was inevitably referred to as an anthropomorphist. This is a grave insult coming from biologists, zoologists and the like, because it entails attributing human emotions to animals. Many people who have worked in the field with animals for long periods of time are criticized for this practice by their more book-smart colleagues. Another example would be Jane Goodall who worked for years with chimpanzees.

At one point in ancient Celtic history, a god of swine was revered. He was called Moccus, and later merged somewhat with the Roman god Mercury. It is stipulated that Moccus was attributed with protecting boar hunters. For Jews and Muslims throughout history, pigs have been considered the most unclean animal on earth. The kosher lifestyle strictly forbids the consumption of pork. Some theories offered up for this phenomenon are that pigs have been observed to eat the flesh of already-dead humans, and also that raising pigs in the Middle East is an extremely inefficient practice because of various factors, including climate. Pigs have come to symbolize capitalist greed to some cultures, and laziness to others. Pigs sometimes bathe in mud because they lack sweat glands, and this is an effective way for them to cool off. This is often misinterpreted as a love of filth. Pigs do, however, tend to keep their actual living spaces relatively clean.

Pig sanctuaries across the world

There are several pig sanctuaries across the world. Take a look at their websites to find out more about campaigns aimed at helping pigs, and about how these organizations operate. A well-known organization is Pigs, A Sanctuary, in West Virginia. Others include IronWood Pig Sanctuary in Arizona, which specializes in rescuing pot-bellied pigs that have been abused or abandoned, and helps owners who need advice in caring for their pot-bellied pets. Another pot-bellied pig rescue involved in rescue, adoption and advice for caregivers is Noah’s Ark Pot-Belly Pig Rescue, which is run by a devoted veterinary technician who started her organization in 1997.

Nonprofit organizations such as Farm Sanctuary, with locations in New York and California, also work to improve the welfare of pigs living on industrial farms.

7 Tips for Protecting Your Skin Against the Summer...

Scrapbooks from an Artist’s Perspective