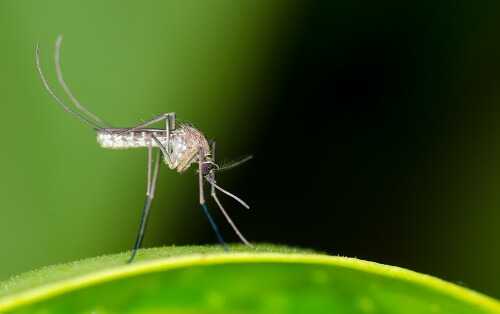 Mosquitoes are one of the most hated biting insects in the world. Most people can recognize them on sight or sound, that sneaky flying pest with the high pitched whine. They can transmit diseases, they leave an itchy welt when they bite, and they hamper outdoor activities with their relentless bombardment. They are the enemy. But to combat the enemy, you must first have a working knowledge of them.

Like most insects, the mosquito has a life cycle, starting with an egg which hatches into a larva, then changes to a pupa before becoming an adult. All species of mosquito need water to complete their life cycle, and the ideal conditions are standing water of any kind. The female will lay her eggs either singly or in rafts of up to 200 on the surface of the water. The eggs hatch within two days into larvae, which hang out at the surface to breathe from a siphon in their rear and eat micro-organisms. After molting a few times, the larvae change into pupae and from there into adults. This entire life cycle can happen in as little as four days or as long as four weeks.

Once they are free flying adults, they mate, and then the females begin their strategic search and suck missions. The male mosquito only eats nectar and plant juices, but the female requires the protein in blood for egg development. So she hunts down her prey, usually through scent and body heat, sticks her proboscis through your tender skin and siphons off your precious life energy. She must die.

There are a few ways to combat the dreaded mosquito invasion. Many communities will do neighborhood fogging, and there are tons of backyard remedies that have a similar effect. There are also a whole slew of repellants on the market. The problem with these methods is that they usually have chemicals with names as long as your arm. These days, most people are conscious of the fact that chemicals tend to have adverse effects on your health. So what are the non-chemical methods for getting rid of mosquitoes?

The first method is simple common sense—don’t let there be any standing water around your abode. Turn empty buckets over so they don’t fill with rain water, keep some form of filtration going in your pools, make sure bird baths are changed regularly, etc. Remember that life cycle—mosquitoes need water to reproduce!

A common method used widely is citronella. Something about this substance is abhorrent to your mosquito enemy. It’s often used in applied repellants like sprays or gels and in candles as an environmental repellant. One issue with citronella is that the smell can be almost as repulsive to humans as to the insects.

One high tech and low chemical method of controlling mosquitoes is a device like the Mosquito Magnet that lures mosquitoes in by simulating the gas exhaled by humans. This method won’t get all those wily insects, though, so expect to still get a few sneaky bites. It’s also a gadget, and gadgets tend to need maintenance.

Smoke of any kind is a bug repellant. However, smoke is kind of hard for humans to breathe, too. But if you can stand a little smokiness, incense burning or smudging with dried white sage in a perimeter around the area you want to protect can be fairly effective.

Creating your own bug repellant is also an option, if you can handle the extra time and minor mess. There are a few recipes out there for home made bug repellants; one such recipe calls for the oils of: jojoba, eucalyptus, lemon, clove, cedar, orange, lavender, peppermint, and cinnamon. These may not work on all biting insects, but seem to be quite effective against mosquitoes.

The one good thing about mosquitoes is that they provide a bountiful source of food for insect eating creatures. Bats, birds, fish, and even spiders are our allies against the invading horde. Mosquitoes are definitely a part of the food chain, but that food chain doesn’t really belong on your patio or deck. Also, it’s a bit humiliating to become a part of that food chain by being a banquet for a flying blood bank. So be vigilant, troops, and remember that there are ways to combat the enemy besides slathering on the Off.