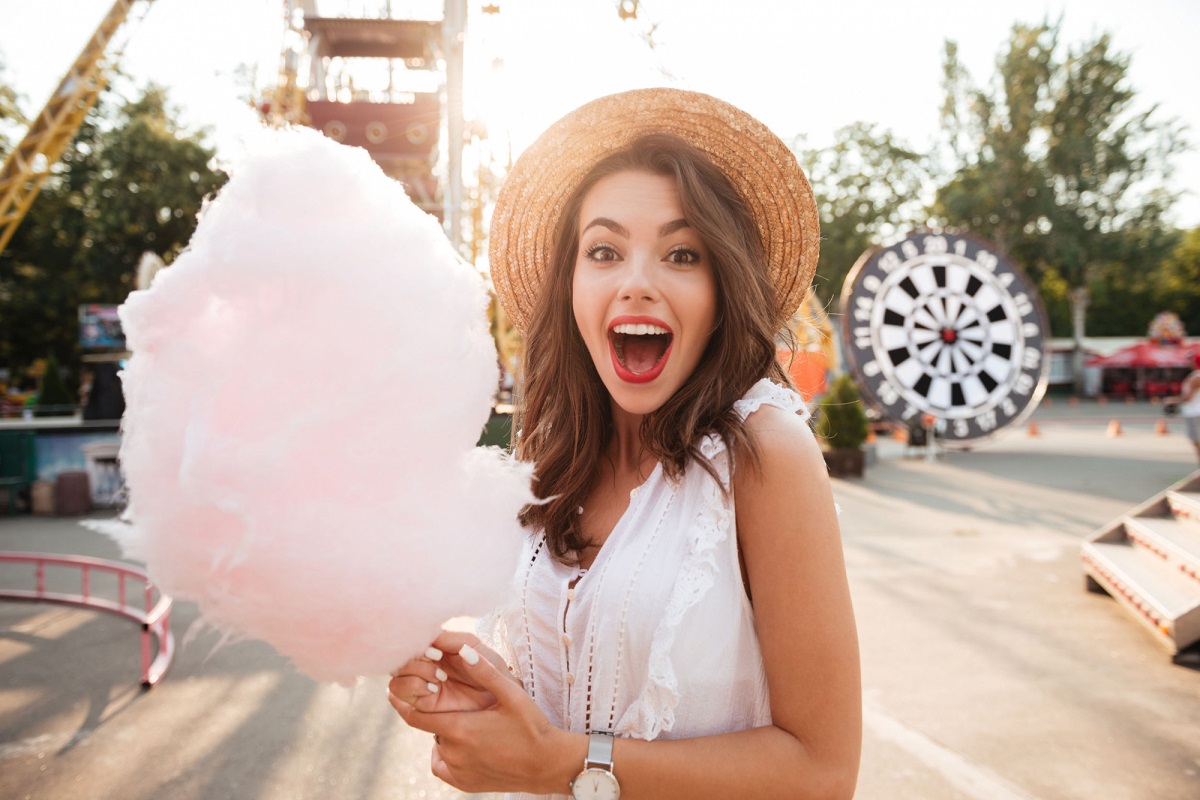 You see it at carnivals, circuses and ballgames. You smell its warm sweetness wafting through the air. You remember the feel of biting into a sticky, pastel cloud and having it dissolve instantly into sweet nothings.

Everyone knows what it’s like to indulge in cotton candy. Here are some things you might not know about this classic treat.

Cotton candy is fat free. An average serving of cotton candy weighs about one ounce and contains around 100 calories. While the servings appear large, they consist mostly of air.

John C. Wharton and William J. Morrison, a candy maker and a dentist, respectively, patented the first cotton candy machine in 1899. Around the same time, a Louisiana dentist, Josef Delarose Lascoux, invented a similar machine and began selling cotton candy out of his dental office.

Cotton candy made its major national debut at the St. Louis World’s Fair in 1904. Other notable items debuting at the fair were the X-ray machine, the electric typewriter and the ice cream cone.

What Americans call cotton candy is known as “candy floss” in England and “fairy floss” in Australia. The French name translates to “papa’s beard.” Greeks refer to the treat as “the old lady’s hair.”

Cotton candy is a versatile dessert. While most commonly found in pink and blue, it can be custom-dyed to match any color palette. Flavors range from vanilla and chocolate to saffron and pistachio.

Cotton candy can go upscale. For decades, huge poufs of cotton candy have been presented to patrons at the Four Seasons restaurant in New York City. Other fine-dining establishments offer the sweet treat on its own or as an eatable garnish for other desserts.

Trendy bartenders can whip up a cotton candy martini

The preparation begins by placing a small portion of cotton candy into a martini glass. When the liquor hits it, the candy immediately dissolves into liquid sweetness.

Cotton candy vending machines were introduced in America in 2009. In less than a minute, these ingenious contraptions spin out a fresh, warm serving of cotton candy while playing the tune “Sugar Sugar” by the Archies.

Now you know a little more about cotton candy. But the most important thing to know is the way it tastes, and you already knew about that. Its distinct aroma, playful appearance and airy texture make it an unforgettable indulgence.

Everyone has enjoyed the sweet taste of cotton candy. Its aroma evokes memories of summer, family and fun. But how much do you know about this puffy, colorful confection?

8 Ways to Start Your Day Fresh